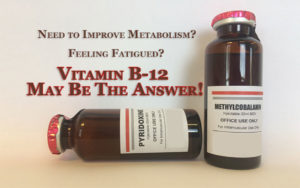 Unlike other vitamins, such as A, E, D, and K, that are fat soluble, which means that they are stored in the liver, and excess intake can lead to adverse effects, Vitamin B-12 or its technical name, cobalamin, is a water-soluble vitamin which the body excretes when in excess. It plays many roles in the millions of daily physiologic processes in our bodies including the repair of DNA, proper functioning of the circulatory and nervous systems, protein metabolism, and it is needed in the bone marrow in order to produce healthy RBCs formation (red blood cells).

Symptoms of B-12 Deficiency

Like many other “essential nutrients”, vitamin B-12 is not naturally produced by the body. Instead, it must be obtained from the food we consume, or from nutraceutical supplements such as the ones found in fortified foods in the synthetic form called cyanocobalamin, or in multivitamins. When a person is B-12 deficient, a myriad of symptoms evolve such as fatigue, palpitations, a smooth red – sometimes swollen tongue, problems of the nerves such as numbness, tingling, and muscle weakness. Other symptoms B-12 deficiency are directly related to mental health including cognitive difficulties such as thinking and reasoning, depression, memory loss and changes in behavior. It is important to understand that these symptoms may be caused by other factors not necessarily related to cobalamin deficiency. But a lack or insufficiency of this vitamin should be ruled out during diagnosis..

Causes of B-12 Deficiency

B-12 deficiency happens when the body is unable to either process B-12 from food or when it is lacking in our diet. Deficiency of B-12 and folate, a type of B vitamin, can lead to a form of anemia called megaloblastic anemia where red blood cells are larger and fewer than normal red blood cells. A type of anemia, known as pernicious anemia, is caused by a deficiency of B-12 due to the absence of a protein called “intrinsic factor” (IF). The transport of B-12 to the ileum, the last part of the small intestine, starts in the mouth, where a protein released into the saliva and also in the stomach, the R-protein, binds to B-12 and protects it from damage by hydrochloric acid in the stomach and facilitates its transport to the small intestine. Once in the small intestine the R-protein releases B-12 through the function of pancreatic enzymes, and intrinsic factor binds to it to protect the B-12 from other digestive enzymes in the GI track, and helps to complete the vitamin’s final journey to the ileum where enzymes unbinds B-12 from IF and receptors specific for B-12, absorb the vitamin and release it into the blood stream and to the liver.

Other causes of B-12 deficiency may include diet preferences such as a vegan or mainly vegetarian type of diet. Deficiency of B-12 may also be found among those who suffer with celiac disease or has had a a gastric bypass, and by those who consume anti-acids. Some medications can lead to cobalamin deficiency such as the diabetes drug metformin which prevents B12 from being absorbed.1http://care.diabetesjournals.org/content/35/2/327 Omeprazole (Prilosec), discussed below, inhibits stomach acid which is needed for proper digestion and assimilation of B-122http://www.mayoclinic.org/healthy-lifestyle/nutrition-and-healthy-eating/expert-blog/heartburn-and-b-12-deficiency/bgp-20091051. Disorders of the small intestine such as Crohn’s disease that can damage the ileum where B-12 is absorbed and lead to deficiency. Age also plays a factor in B-12 levels. It is estimated that 38% of older adults exhibit mild to serious levels of B-12 deficiency.3 Hoey L, Strain JJ, McNulty H. Studies of biomarker responses to intervention with vitamin B-12: a systematic review of randomized controlled trials. Am J Clin Nutr. 2009;89:1981S–1996S. [PubMed]

The Role of Proton Pump Inhibitors (PPI) in B-12 Deficiency

When foods rich in cobalamin (B-12), such as meat and liver enter the stomach, they are said to be protein bound. In contrast, foods that are fortified with the vitamin or when taken as a B-12 supplement, is considered to be in free form. Protein bound vitamins need the presence of sufficient hydrochloric acid to unbind them from protein through the action acid and of pepsin, an enzyme that breaks down protein. Such is the case with B-12. The acid released by the parietal cells breaks down the protein/B-12 complex to make it available for transport out of the stomach by quickly binding to the R-protein into the small bowel.

However, when a someone who has been diagnosed with hyperacidity, or suffers with GERD, also called acid reflux, or peptic ulcer disease (PUD), the usual form of treatment is with anti-acid medications that inhibit the mechanism responsible for acid secretion in the stomach by the parietal cells. The so called Proton Pump Inhibitors. Medications such as Prilosec, Prevacid, and Nexium fall within these type PPIs. As stated above, pepsin is needed to break down protein bound B-12. Pepsin is released through the presence of hydrochloric acid. When the PH of the bottom of the stomach, called the pyloric stomach, becomes too alkaline which not only prevents pepsin stimulation but it allows the proliferation of bad bacteria that would normally be kept in check by the hydrocloric acid.

B-12 is not like other vitamins that are easily found in vegetables, grains, and fruits. B-12 is primarily obtained from animal products such as meat, fish, eggs and dairy products. It is possible that even when consuming foods rich in B-12, that an underlying deficiency may be present particularly within the 50 years old and above population. If you think that you may be at risk of being deficient, please feel free to contact us for an evaluation and possible lab workup and supplementation of this important nutrient by way of Methylcobalamin (active B-12) injections4Florida Law. 64B1-4.012 Acupoint Injection Therapies.
Effective March 1, 2002, adjunctive therapies shall include acupoint injection therapy which shall mean the injection of herbs, homeopathics, and other nutritional supplements in the form of sterile substances into acupuncture points by means of hypodermic needles but not intravenous therapy to promote, maintain, and restore health; for pain management and palliative care; for acupuncture anesthesia; and to prevent disease..