In part I of these series of articles on Functional Blood Chemistry Analysis, we took a brief look into concepts within Chinese medicine regarding the function of blood and its intimate relationship to the organ systems. We also named the 4 main components of blood and will now take a closer look at the plasma since it is within this fluid that all the components of blood flow within our arteries and veins.

Made of nearly 90% water, plasma is the yellowish liquid part of our blood.1https://www.britannica.com/science/plasma-biology It is the blood’s largest component and accounts to about  55% of the total blood volume. The remaining part includes about 45% red blood cells, and about 1% white blood cells, the cells that provide our body with the immune response to pathogens. Also, within the plasma we find cell fragments known as platelets. These are important, along with other proteins known as clotting factors, for their role in the prevention of bleeding and include fibrinogen, fibrin, Prothrombin and thrombin among others. These components of plasma are the target of pharmaceuticals known as blood thinners that fall into two categories: antiplatelets and anti-coagulants, such as Aspirin and Coumadin, respectively, but I digress. 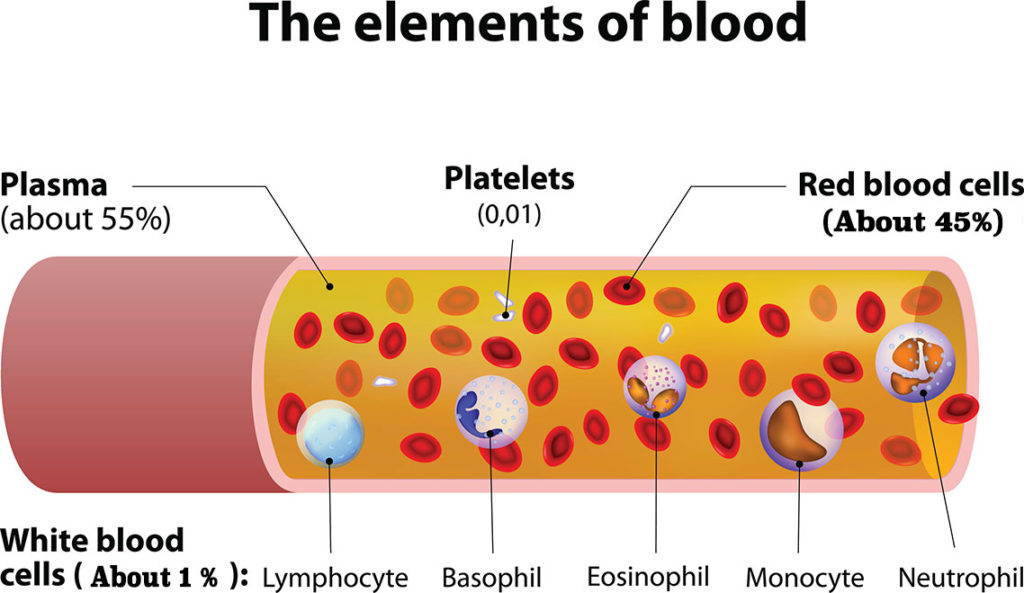 Plasma also supplies nutrients to our tissues like glucose, amino acids, minerals like potassium, sodium, and chloride. Lipoproteins such as LDL, HDL that carry cholesterol are found in the plasma.  It is a venue for antibodies, chemical messengers such as hormones,  (usually  bound to proteins), enzymes, and equally important, plasma is involved in house cleaning by removing the waste created in the cells during everyday metabolism such as carbon dioxide, urea and creatinine.2https://www.science.org.au/curious/people-medicine/plasma Think of plasma as the river in which all of the above elements are suspended and are propelled by the function of the heart to target tissues and organs.

Along with the renal system (kidneys), the respiratory system (lungs), plasma plays an important role in the acid-base levels in our bodies.3https://www.sciencedirect.com/topics/medicine-and-dentistry/blood-ph Our blood is kept at a very tight range within the alkaline ph region of around 7.37 and 7.43 ph. With ph of 7 being neutral and below 7 acidic, the plasma ph indicated above makes our blood slightly alkalized. Keeping this narrow range of ph is important since many enzymatic activities are dependent on this optimal ph environment. Changes in this ph are quickly remedied by buffer systems including proteins, and the role of the kidneys and the lungs. More on this in a future article..

As stated above, plasma is the liquid aspect of whole blood where all the individual elements that make up the blood are suspended. A major component of blood plasma are proteins involved in coagulation. Above, I mentioned platelets, also called thrombocytes, which are segments of a large cell made in the bone marrow called Megakaryocyte. Platelets are the first responders when injury takes place in the cells of veins and arteries. In an effort to stop bleeding, platelets aggregate and form a plug in the site of injury. If the damaged tissue is small, platelets may be all that is necessary to stop the bleeding. However, if the injury is large, a series of steps are taken in a sequential fashion that activate a group of proteins that eventually seals the site of injury. This is known as the coagulation cascade.4https://www.ncbi.nlm.nih.gov/pmc/articles/PMC4826570/   So far, scientist have discovered 12 of these proteins which are collectively called coagulation factors.5https://www.ncbi.nlm.nih.gov/books/NBK507850/ What does this have to do with Serum? Read on.

Serum is the left over fluid when plasma has the clotting factors removed or when blood is allowed to coagulate outside our bodies. Inside our body blood is kept from coagulating, except when there’s injury, by the release of heparin from cells in the liver, lungs and other tissues in the body, and by the continuous circulation promoted by the heart and muscle contraction.  Synthetic heparin is often used as an anti-coagulant in patients prone to coagulation disorders or during surgery to prevent clots. But what happens to the blood when it is collected in the laboratory? It depends on the test tube. I’ll explain.

Immediately after drawing the blood, it is deposited into tubes made of either glass or

plastic. You will also notice the different colors to the tube’s caps.   In my research for this topic, I found it very interesting that blood will have a tendency to coagulate faster in glass tubes than in plastic tubes due to the negative electrical charge of glass.6https://www.ncbi.nlm.nih.gov/pmc/articles/PMC438573/pdf/jcinvest00619-0023.pdf This reaction is known as surface activation factor.7https://www.ncbi.nlm.nih.gov/pmc/articles/PMC2705825/ Meaning, that when blood comes in contact with certain surfaces, some of the proteins involved in coagulation become activated leading to the coagulation cascade of which we spoke above.  This surface activation factor is precisely what initiates clotting in Vivo (inside the body), when damaged cells in the veins or arteries expose the inner surface of the blood vessel lining. Upon contact with blood, this exposed surface of the blood vessel, initiates, through various signaling mechanisms, the coagulation cascade. Fascinating!

But why do the tubes have different colored caps?

When a physician orders blood workup, there may be several biomarkers in the blood that he/she would like to measure in order to get an idea of what is causing the symptoms the patient presents. Or perhaps it is just a routine annual exam. Some of these biomarkers are better measured in whole blood. Histamine, for example. Others are more accurate when measured in serum, and yet plasma is sometimes the desired substance when seeking the presence of some proteins. Plasma inspection is more useful than serum in cases of emergencies when the 30 minutes of coagulation time is too long of a wait.

So depending on the component of blood from which a biomarker is to be measured, the tubes into which the drawn blood is deposited, are prepared with anti-coagulants to keep the blood from clotting while inside the tube. These tubes are “coded” with caps of different colors each indicating whether an anti-coagulant has been used or not. Labs use different types of anti-coagulants and this is also indicated by the color of the cap. When coagulation is desired, these tubes are not coated or sprayed with an anti-coagulant and the blood is allowed to coagulate. Currently there are tubes with a separating gel that initiates coagulation and separates the serum from the coagulated blood. The next step is to use centrifuge equipment to separate the components of blood for further testing. More on centrifugation later.  For the curious reader, more information can be found in this page at LabCorp.8https://www.labcorp.com/resource/blood-specimens-chemistry-and-hematology

The above is just a simplified, encapsulated, and barely scratching the surface of the role of plasma. But we must move on.  We will now turn our attention to the platelets. These are very interesting and play a significant role in hemostasis, immune function and have received more attention as PRP therapy (Platelet Rich Plasma) in the field of regenerative medicine. Stay tuned!