What is Dry Needling?

Dry needle is a term that defines a type of needle therapy. It was coined by Janet Travell, MD (December 17, 1901 – August 1, 1997), who as cardiologist found that many of her patients who had  symptoms similar to those of a heart attack, such as pain in the chest that radiated down the arm, were in fact suffering from trigger points (TrPs) in the muscles of the chest. Her observations led to further study on the effect of trigger points on patients at the Cardiac Consultation Service at Sea View, the city hospital for tuberculosis on Staten Island 1https://www.ncbi.nlm.nih.gov/pmc/articles/PMC152828/. These patients’ main complains were not generally around their pulmonary disease. Instead, they complained of pain around the shoulders and arms, and through palpation she determined that the pain was referred pain from trigger points.

To treat these TrPs, Dr. Travell developed manual techniques that included the use of  vapocoolants, a type of spray containing ethyl chloride or Fluori-Methane. The technique is called “spray and stretch”. The explanation of the physiological effect of the technique is beyond the scope of this article. But in her work she found the sudden change of temperature from the spray in conjunction with manual stretching of muscle tissue,  had an effect on the local area where the TrPs were found leading to their release.

In her efforts to further her understanding in the treatment of TrPs,  Dr. Travell took interest in the work of Dr John Kellgren, a British Rheumatologist from University College Hospital, London who had published and article on the British Medical Journal titled, “A Preliminary Account of Referred Pains Arising from Muscle.2Kellgren JH. A preliminary account of referred pains arising from muscle. Br Med J 1938;1:325–7 Dr. Kellgren had been experimenting as far back to the early 1930’s with saline injections into muscle tissues. He discovered that injecting a muscle often generated pain in an area distal from the site of the injection. He also noticed that when applying digital pressure to tender tissue, that pain was reproduced in the same pattern as the saline injection. An important discovery by Dr. Kellgren was that the referred pain patterns from either the saline injection, or manual pressure on tender points, was the same pattern on almost all of the patients on which he experimented. From subject to subject, the pain pattern was very similar.

At some point during experimentation, it was found that there was no difference in the outcome of trigger points when treated with a substance infiltrated through the hypodermic needle, or when the trigger point was stimulated by the needle without a chemical solution. In a study conducted by Czech Republic physician Karl Lewitt, evidence indicated that the effect of the needle without a chemical substance yielded equal or better response to the common practice of chemical infiltration.3 Lewit K. The needle effect in the relief of myofascial pain. Pain 1979; 6: 83–90 Thus, the term Dry Needle was coined in contrast to the use of saline or other pain reducing medicines.4Cummings TM, White AR. Needling therapies in the management of myofascial trigger point pain: a systematic review. Arch Phys Med Rehabil 2001; 82: 986–92 5Ga H, Choi JH, Park CH, Yoon HJ. Acupuncture needling versus lidocaine injection of trigger points in myofascial pain syndrome in elderly patients–a randomised trial. Acupunct Med 2007; 25: 130–6. 6Hong CZ. Lidocaine injection versus dry needling to myofascial trigger point. The importance of the local twitch response. Am J Phys Med Rehabil 1994; 73: 256–63.

Dry Needling, then, is the release of trigger points by way of stimulation through the use of a needle in the absence of a liquid chemical substance. The release of such TrPs, is accomplished when the needle stimulation leads to a reflex reaction known as a twitch response or fasciculation7https://en.wikipedia.org/wiki/Fasciculation

Is Dry Needling The Same As Acupuncture?

Furthermore, physical therapists take the stand that acupuncture is practiced by inserting needles at specific points found along meridians with the aim to restore the flow of Qi (energy) and thus restoring health. Dry Needling aims at releasing taut bands of muscle tissue found in multiple places around the body’s musculature independent or separate from the meridians found in Chinese medicine.

Acupuncturists classics  state that it is the blockage of Qi (pronounced “chee”) that leads to pain. The insertion of a needle on specific points corresponding to the meridian linked to an organ, can promote the flow of Qi, leading to pain relief. The physical therapist, based on current research, asserts that taught bands of sarcomeres, a lower PH value, poor blood flow and low oxygen levels in the immediate tissue, coupled with peripheral and central sensitization is the cause of pain and that only when the focal area of the sarcomere’s contracture or muscle shortening, aka the trigger point, is released through needle stimulation, can the function of the musculature be restored and pain relieved.

So is Dry Needling the same as acupuncture? A simple answer is yes.. The word acupuncture dating back to the 17th century is a compound term. Acu, from the Latin meaning needle, and puncture meaning to penetrate the skin. Physical therapists practicing Dry Needling are penetrating the skin with the same filiform needles that an acupuncturist uses. However, one could make the argument that the use of a hypodermic needle puncturing the skin for a subcutaneous injection is the practice of acupuncture. Yet, no one seems to worry about nurses and other medical professionals practicing needle-puncture. We know that at some point in her practice, Janet Travell preferred to use a hypodermic needle without a solution, to activate trigger points.. She felt that the thickness of the hypodermic needle facilitated the twitch response better than the thinner filiform needles used in acupucnture. 8Travell, Simons, & Simons, 1999, pp. 154–155

Of interest, is an emerging trend within the acupuncture profession to treat sports and orthopaedic conditions. Sports acupuncture is gradually gaining popularity within CrossFit members, triathlons participants, and weekend warriors who find the practice of sports and orthopaedic acupuncture to offer the best of both worlds; the traditional approach combined with modern understanding of exercise physiology and therapeutic interventions minimally invasive. Acupuncturists who practice this type of therapy use Dry Needling, Motor Point Acupuncture, orthopaedic assessments, soft tissue manipulation, and therapeutic exercises. To find more orthopaedic acupuncturists in your area, please visit: FiliFormNeedle.com

First, I have completed the Myopain Seminars training and passed the practical and theoretical exams. I am now a Certified Myopain Trigger Point Therapist. 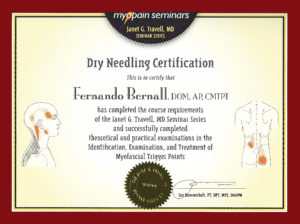 Second, I would like to add that there are many physical therapists who are practicing acupuncture under the Dry Needle umbrella. Some are retaining needles and using distal acupuncture in their treatment. There are physical therapists that are using electroacupuncture.. I think this is unfortunate and a violation of scope of practice and beyond Dry Needle as I was taught at Myopain Seminars.. I find this detestable and unethical.