Moxibustion is a style of thermal therapy which at the hands of a skill therapist can bring quick healing results to pain of a chronic nature. An ideal modality in the practice of any bodyworker including massage therapists, physical therapists, chiropractor and others. But, in the hands of an acupuncturist, it works like magic.

Moxa, a Japanese word meaning “burning herb” refers to dried mugwort, a common herb also known under the Chinese name Ai Ye. Moxibustion then is the burning of dried mugwort above the surface of the sking on acupuncture points.

Moxibustion’s first textual reference predates the first written reference of acupuncture and it seems to have been around somewhat more than 2500 years. From ancient until modern times, some doctors specialized in moxibustion and treated their patients solely with moxa. Today, moxibustion is often combined with acupuncture. 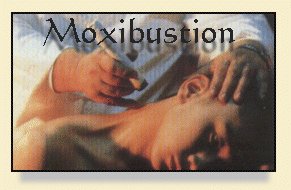 Indirect moxibustion refers to the method of separating the burning moxa wool from the skin by some type of medium. This medium may be ginger, garlic, or salt, or it may be air. When referring to air, this means that the burning moxa does not directly touch the skin but rather simply heats it up, causing it to become red. This last effect can be achieved, for example, by holding a lit stick of rolled dried mugwort close enough to a certain area of skin, somewhat similar to holding a burning cigar close to the skin. Small amounts of mugwort can also be attached to inserted acupuncture needles so as to heat these up and carry the heat, through the needles, to very deep levels of the body.

The herb Ai Ye (mugwort) in Chinese medicine has the function of penetrating and opening all twelve regular acupuncture channels, so as that qi and blood can flow smoothly and that the circulation is reactivated. In addition to that, moxa has a warming effect, adding heat to the body in order to warm body parts which feel cold or which become sore and painful in the cold. I also use moxa on chronic injuries that have not responded to acupuncture or massage.

In Chinese medicine, pain is regarded as non-free flow of qi and blood. If, by way of applying moxibustion, heat is added to the body and the channels are opened, then qi and blood will flow smoothly and uninhibited again and pain or other signs of cold subside.

Therefore, moxibustion is a terrific and effective therapy for any problem that is of chronic nature or that becomes worse during cold weather. Arthritis which is aggravated by cold and damp weather, frozen shoulders, or chronic and long-term backaches are only a few examples. However, moxibustion is not limited to such musculoskeletal diseases. Diarrhea can often be cured instantly by burning moxa on salt in the belly button and, even more noteworthy, a study recently published in the Journal of the American Medical Association (JAMA) has shown that acupuncture was reasonably effective in turning breech position children during their 33rd to 35th week.

In my practice I make use of all types of moxibustion techniques ranging from the traditional salt, ginger, and garlic moxa to indirect moxibustion method. Moxa has a strong aroma. The first time moxa is smelled, it may lead one to think that Cannavis Sativa, aka: weed, pot, marijuana 4:20 and so on, is being burned; not the case..