Today, when one speaks of Chinese Medicine, the reference is made to a collective group of therapies that include acupuncture, herbal medicine, body work, and movement modalities such as Qi Gong, Tai Chi and the like. In our modern era, electro-acupuncture, acupoint injections, and several styles of orthopedic needling techniques are also included. In this article I will focus on herbal medicine and hope to give the reader a basic understanding of one of China’s greatest contributions to mankind – Chinese Medicine.

Similar to acupuncture, the earliest textual references to Chinese herbal medicine can be traced back to around 2500 years. Differently from acupuncture, however, herbal medicine developed initially as a purely pragmatic system and was not based on an underlying theory of organs and channels, qi and blood. 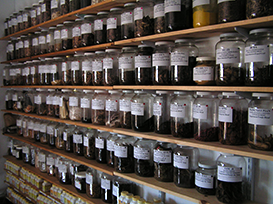 Herbs had been used in ancient China for external wounds from the many wars that were fought long before such remedies were actually recorded and studied. Furthermore, animal, plant, and mineral substances were ingested as foods and their medicinal benefits were noted subsequently.

Herbal medicine really began to develop in the third century B.C.E. when the Taoists began searching for the herb of immortality.

The Divine Farmer’s Materia Medica (Shen Nung Ben Cao) is regarded as the first book on Chinese herbal medicine and dates back to about the 2nd century B.C.E. In the following 20 centuries, the pragmatic functions were integrated into the theoretical system of Chinese medicine and medicinals were studied as to their qualities and their medicinal effect and were recorded by various scholars, most notably by the renowned physician Li Shi-zhen who recorded 2000 medicinals in his monumental work Ben Cao Gang Mu.

Chinese herbal medicine is unique in that it is very patient specific and must be based on a Chinese medical pattern differentiation to be most effective. This means that prior to the prescription of Chinese herbs, a practitioner of Chinese medicine needs to conduct a diagnosis, analyzing the signs and symptoms, the pulse and tongue and form the findings into what is called a pattern – a set of signs and symptoms which is unique to the individual.

Herbs are then prescribed according to that pattern, not for the disease. To illustrate this point with an example, let’s consider headache. Chinese medicine considers there to be about 12 different patterns for headache; accordingly, herbs vary widely. Herbs for a migraine type headache which is throbbing and causes light sensitivity and violent pain are fundamentally different from herbs prescribed for a headache which presents as a continues low-grade ache and improves upon lying down.

In the first case, the migraine headache, heavy medicinal substances, such as oyster shell and hematite are prescribed. In the latter, medicinals such as ginseng root or astragalus are necessary. Prescribing the second set for the first type and the first set of heavy herbs for the second types of headache would cause both of them to worsen, not to improve.

This is the strength of Chinese herbal medicine – to be patient specific and not disease specific. This is also the reason why Chinese herbal medicine, when prescribed by professionally trained herbalists, does not cause side effects and does not interfere with other ailments which might exist. Chinese medicine takes the whole body in consideration and not simply the illness. Accordingly, Chinese herbs are prescribed for the underlying imbalance and correct not only the predominant concern but also all the other “little” ailments.

A Chinese herbal formula consists of around 12 to 17 individual herbs, all of them working in a symbiotic relationship to strengthen one another, reduce one=s side effects, and balance each other=s energies and temperatures. These 12 to 17 medicinals are selected from a total of about 250 to 300 commonly used medicinals and include such different substances as orange peel, cinnamon, cloves, nutmeg, oyster and abalone shells, black pepper, rhubarb root, and even earthworms, scorpions, and centipedes.

The most effective form of administration of Chinese medicinals is the decocting of Chinese crude herbs into teas. However, the somewhat lengthy decoction process and bitter taste of the tea does not fit every lifestyle. Therefore, other ways of administration are available. The most effective of the alternatives is the mixing of concentrated granules.

Thus, prescriptions can still be mixed according to the individual’s needs but the herbs do not have to be decocted. Rather, they can be mixed with warm water just like instant coffee. Lastly, there are also prepared Chinese medicinals available. These are most of the time ancient formulas made into small pills or tablets. Because such prescriptions are not as specific as the individually prepared mixtures, two or sometimes even three prepared medicines need to be taken simultaneously.

Chinese herbs are also frequently applied externally in the treatment of skin diseases and traumatic injury. In these cases, the medicinals are prepared into liniments or washes. With China being the country of origin for many different martial arts, Chinese medicine has an especially rich background in the treatment of martial art injuries.

Currently in my apothecary I carry many bulk herbs, and I also stock an entire pharmacy of concentrated granules and prepared remedies. I have also formulated my own liniments for the treatment of acute and chronic martial arts and other sports related injuries.